Create an Account - Increase your productivity, customize your experience, and engage in information you care about.

Workplace wellness can have a big impact on your employees! Live Well Goodhue County recently partnered with Goodhue County’s wellness committee, the WOW Committee, to pilot a healthy snack station at Goodhue County Health and Human Services. The snack station featured a small refrigerator which held healthy, refrigerated snacks including Greek yogurt, string cheese, hard boiled eggs, salads, vegetables and fruit. The snack station also had bins holding nonperishable items including oatmeal, popcorn, nuts, trail mix, KIND bars and more. Employees paid for their healthy snacks which helped cover the cost to refill the snack station each week. The pilot ran in September, 2019. At the end of the month, employees were surveyed and asked for feedback. Employees who responded to the survey were excited about the option to get healthy snacks in their building.

Are you interested in trying a workplace wellness initiative at your worksite? If so, Live Well Goodhue County can help! We will be starting a free workplace wellness forum in 2020. The forum is open is anyone in Goodhue County who is interested in learning more about workplace wellness and will include quarterly meetings. Our first forum will be held on January 16, 2020 from 8:30 am to 9:30 am at the Goodhue County Health and Human Services Building. Our guest speaker, LuAnn Buechler, will give a motivating presentation on Creating a Culture of Wellness. LuAnn is a Certified Facilitator of the Passion Test and the Passion Test for Business, which she uses in her coaching practices to ignite the SPARK in you and your business. She will share with us just what it means to create a culture of wellness and how that differs from a wellness program. LuAnn will also share examples and other philosophies such as the Blue Zones Project. If you are interested in learning more about the workplace wellness forum or about the funding available for workplace wellness initiatives, please reach out to Megan Roschen, Live Well Goodhue County Co-Coordinator at megan.roschen@co.goodhue.mn.us or 651.385.6140. If you'd like to attend the first forum, RSVP here. 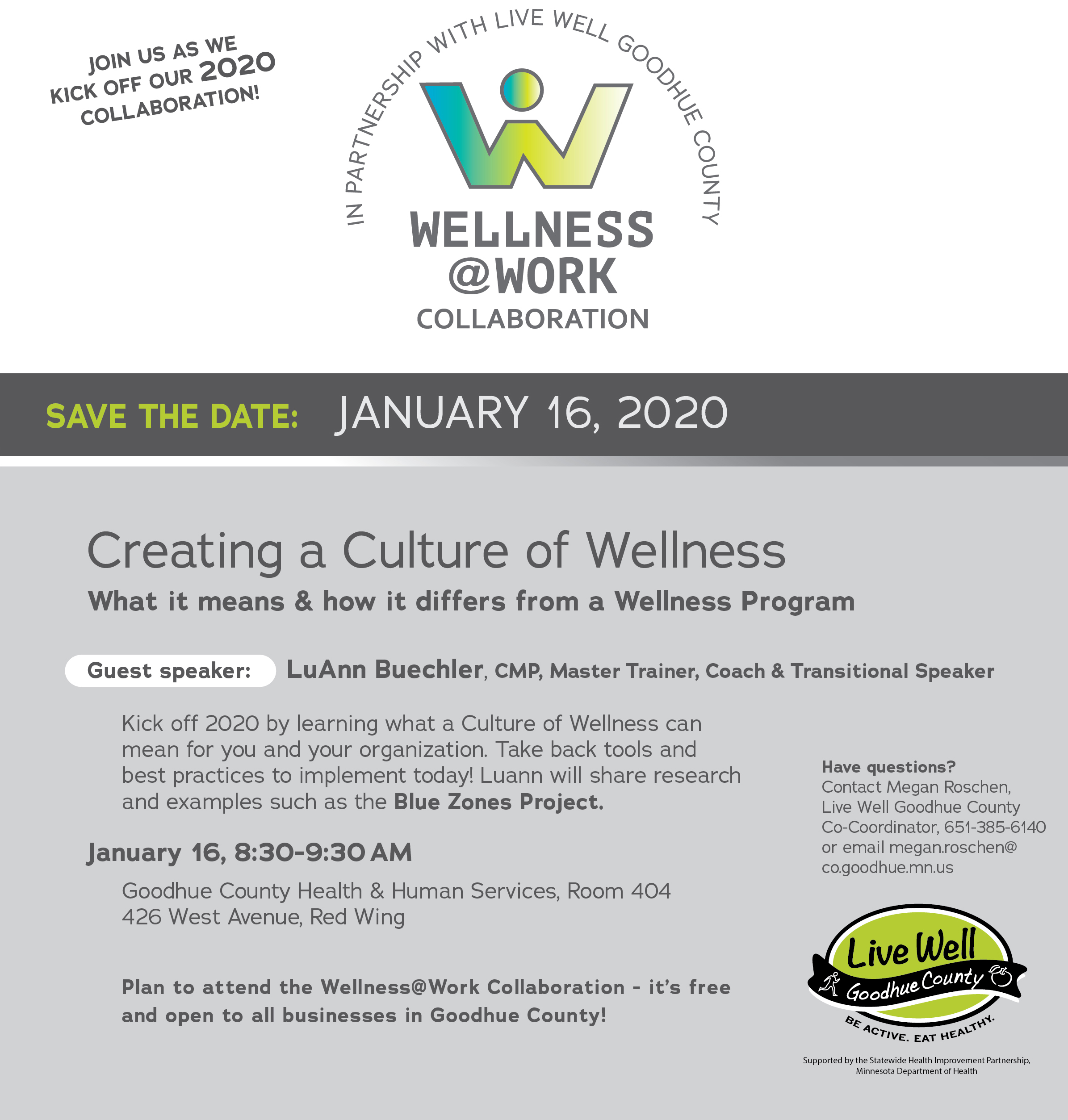 Prediabetes – What You Need to Know 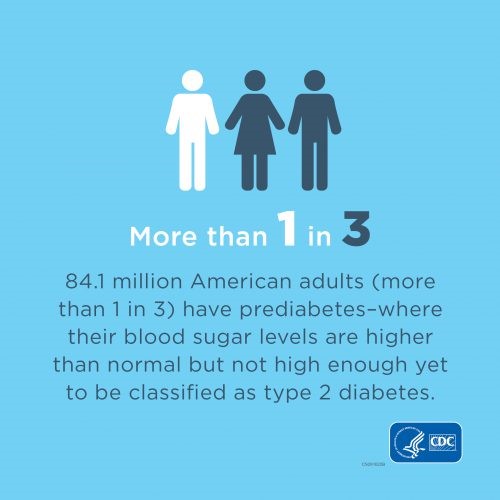 What exactly is prediabetes? Prediabetes is a condition where blood sugar levels are high, but not high enough to be considered type 2 diabetes. Prediabetes increases a person’s risk of developing type 2 diabetes, chronic kidney disease, heart disease and stroke (1). According to the CDC, a staggering 90% of people with prediabetes do not know they have it (2). On a positive note, if you have prediabetes, it can be reversed with lifestyle changes!

Do you want to know if you’re at risk for prediabetes? Take the CDC’s 1-minute prediabetes risk test. Follow up with your doctor if your score shows you are at high risk.

Eating healthy is so important and plays a significant role in preventing chronic disease. With the holidays coming up, it can be difficult to make healthy choices. Here are some tips to help you eat healthier over the holidays (5, 6):

•    Bring a healthy dish if you’re invited to a holiday potluck.
•    If you want to satisfy your sweet tooth, try cutting back on other carbs (potatoes, rolls, etc.) during the meal.
•    Don’t skip a meal to “make room” for a big holiday meal – you’ll be more likely to overeat, and if you have diabetes it will be harder to manage your blood sugar. Research shows those who eat breakfast tend to consume fewer calories throughout the day.
•    If you overeat, don’t feel guilty – just get back to healthy eating at your next meal.
•    Start with a plate of vegetables or salad which can help you eat fewer calories overall. Then have a small plate of the foods you like best. Don’t avoid your favorite holiday dishes, even if they are unhealthy!
•    Eat slowly. If you are thinking about going for seconds, wait 10 minutes after you finish your first plate. You might realize you don’t want seconds or want only a very small portion. It can take at least 20 minutes for your brain to realize you are full. So slow down, have a conversation with a relative and recheck your appetite!
•    Don’t ever put foods on the naughty list! Choose your favorite dishes and savor each bite while limiting yourself to a small serving.
•    Remember to keep moving. Exercise can help offset the extra calories you took in – try taking a brisk walk with a family member after a holiday meal.
•    Don’t hang out next to the food table, it’s easy to mindlessly grab food as you chat. Try chewing gum or a mint to avoid grazing on food before/after the meal.

If you have prediabetes, losing weight by eating healthy and being more active can cut your risk of developing type 2 diabetes in half! (4) Take action and start making some healthier lifestyle choices today.
Follow this link if you are interested in signing up to receive a free Diabetes Management Toolkit:
https://survey.vovici.com/se/56206EE33F980E8C

•    This toolkit is for any caregiver providing health education and can be used to provide general diabetes instruction and self-care guidance. It includes 26 different self-care topics.

Our mission is to improve the health of our residents by making it easier for them to walk, bike, eat nutritious food and live tobacco-free.  Mini-Grants may be used to help change established systems to make it easier to make healthy choices, change the environment in which we live, work, learn and play, and to implement research-based strategies that have been proven to improve health.

•    City of Goodhue – Farmers Market and Power of Produce (PoP)

•    The Artist Sanctuary – Supplies to begin a Community Garden

We are currently looking for partners who are interested in implementing a project in 2020.  The application process is now open for the first round of mini-grants.  For more information and the application, click here. 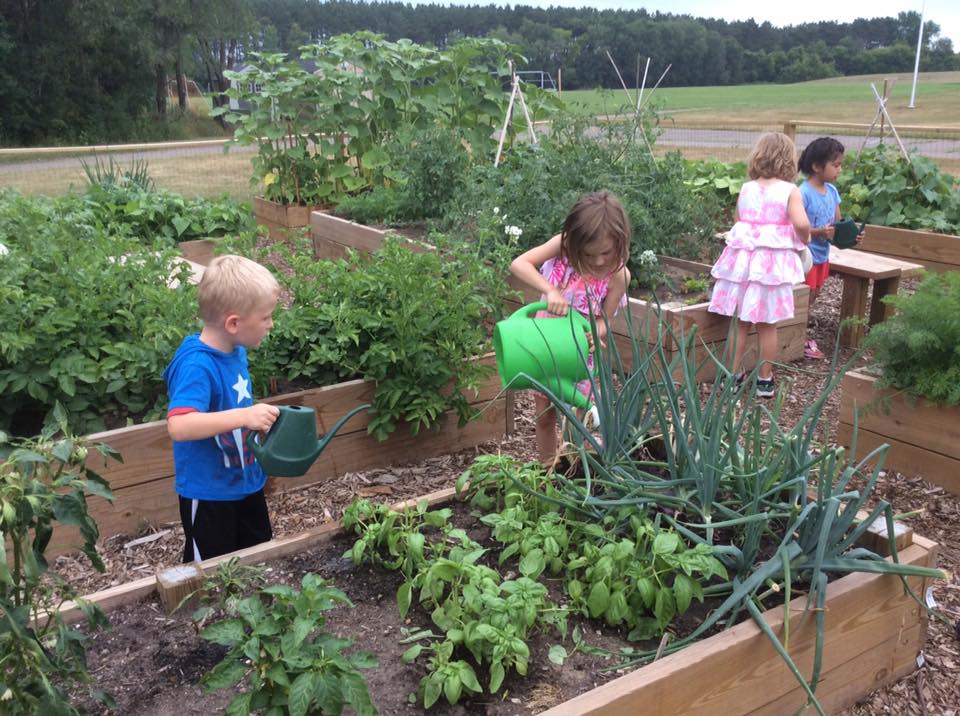 National Tobacco 21  - a historic victory for kids and health!

Big News. . . On December 20, 2019, the U.S. House and Senate approved the Tobacco 21 provision as part of a budget bill that is heading to the President’s desk.  President Trump signed the bill and the law went into effect immediately. Tobacco 21 is an important part of a comprehensive approach to reverse the youth nicotine epidemic.  Raising the tobacco sale age will keep tobacco products out of schools, prevent youth tobacco use and save lives.

Molly Moilanen, Vice President at ClearWay MinnesotaSM and Co-Chair of Minnesotans for a Smoke-Free Generation, said: “A national Tobacco 21 law is a win for kids – and we cannot stop there. There is no silver bullet to this e-cigarette epidemic. Minnesota must continue passing bold policies at the local and state level to combat Big Tobacco and ensure our kids grow up free from addiction.”

“Raising the tobacco age is a great step but we cannot and we will not abandon our other efforts to protect youth from tobacco addiction and help adults quit,” Moilanen added. “Tobacco 21 will be even more effective if paired with strategies including a flavor prohibition and prevention funding. We look forward to working with state and local lawmakers to pass a strong Tobacco 21 bill and other big and bold tobacco prevention policies.”


Why Stop the Start?
A recent study showed that if the tobacco age was 21 in Minnesota, 30,000 young people would not become tobacco users over the next 15 years.¹

•    On Wednesday, December 4th, Minnesota Attorney General Keith Ellison, along with Governor Tim Walz and Lieutenant Governor Peggy Flanagan, announced that the State of Minnesota is suing e-cigarette manufacturer JUUL Labs, Inc. The lawsuit, filed in Hennepin County District Court, alleges among other counts that JUUL has violated multiple state consumer-protection laws, breached its duty of reasonable care, and created a public nuisance.
The complaint that Attorney General Ellison filed describes how JUUL developed products with higher, more potent, and more addictive doses of nicotine than conventional cigarettes and other e-cigarettes — then not only failed to disclose that to its customers, but represented that its products are a safe alternative to cigarettes.

The complaint also describes in detail how JUUL developed sleek-looking products and sweet, popular flavors that were designed to appeal to youth, and how its vast, targeted, and highly effective youth-oriented marketing campaign closely follows the Big Tobacco marketing playbook of decades past in deceptively luring young people into using and becoming addicted to its products. Indeed, JUUL’s co-founder has stated that even before JUUL launched its products, they studied Big Tobacco’s marketing strategies in detail.

To remedy this behavior, the State asks the court to:

A copy of the complaint is on Attorney General Keith Ellison’s website and can be viewed here.

Quitting vaping can be tough, but resources are available that can help.  Research has shown that teens who use tools to help them quit increase their chances of successfully quitting.